This is a remarkable paper… for all the wrong reasons. It was written by a group of breastfeeding researchers about the challenges they face advocating for breastfeeding on social media. Get yourself ready for some seriously bad science!

The paper starts as almost all papers about breastfeeding start – with a wholehearted endorsement of the many purported health benefits of breastfeeding and widespread recommendations to breastfeed:

But, alas, alack! When researchers start to discuss their research on social media, they encounter opposition. This, they suggest, is because people who disagree with them are so emotional! Hang on. Haven’t we heard this before? Women being dismissed for being emotional…hmm…Isn’t that misogyny 101?

So, the researchers got together with parents with different infant feeding experiences and feelings about them and tried to understand how their research communications affect the families they are supposed to help – nah, don’t be stupid! Of course they didn’t! They got together with each other and decided that their critics are ‘breastfeeding denialists’. Then they decided among themselves how the problem of these emotional women on the loose on social media should be handled.

But their own paper highlights a problem that so-called ‘breastfeeding denialists’ have drawn attention to: the research on the health effects of breastfeeding is far more equivocal than the claims made. And damnit, these emotional women are disputing these claims:

It isn’t people questioning the strength of claims made on the basis of equivocal evidence that erodes trust in scientists and health professionals making claims. They undermine themselves by making strong claims in the absence of strong evidence! 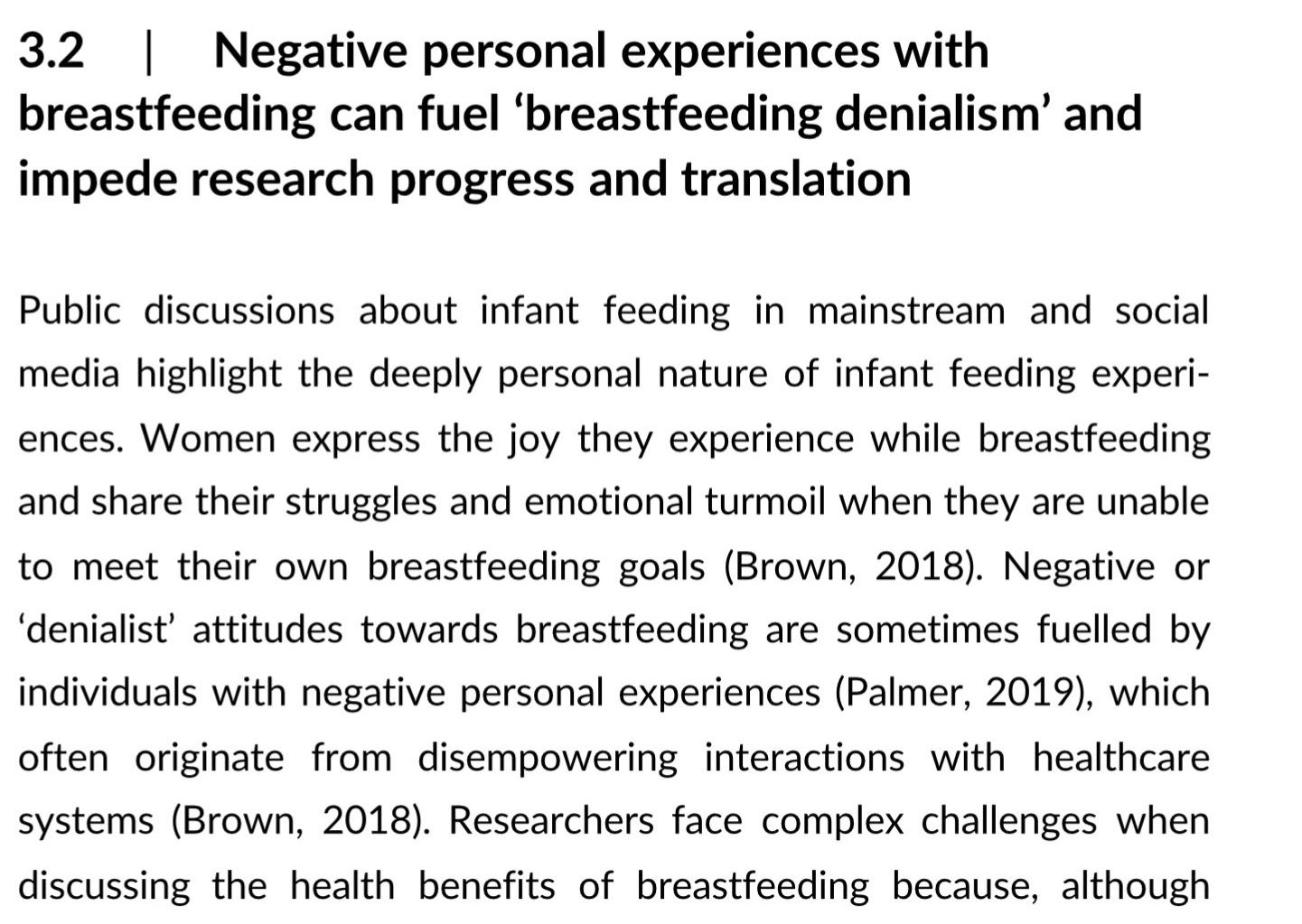 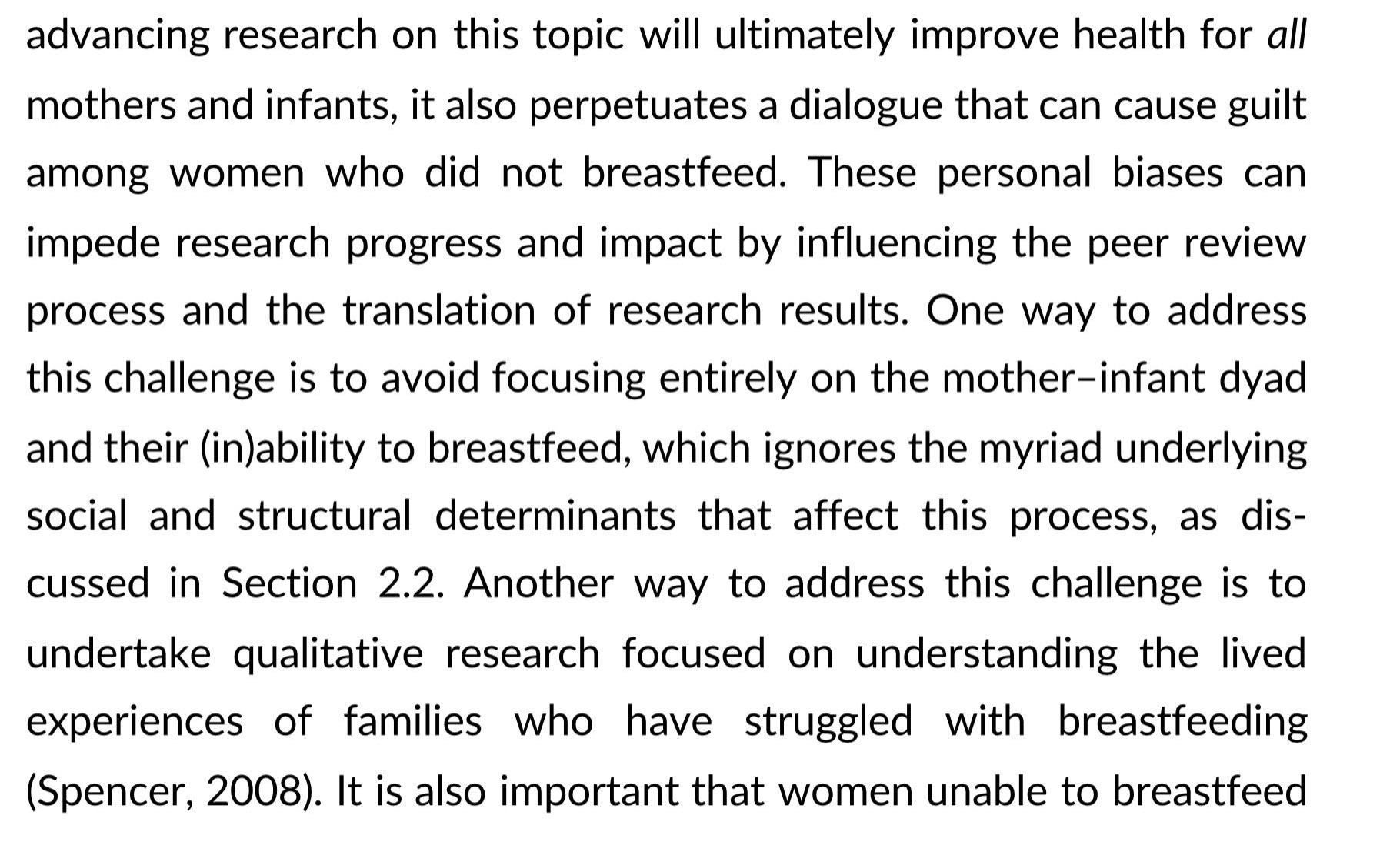 Here’s what they don’t mention: women stop breastfeeding because of pain, latching difficulties and low milk supply. But apparently, there is no need to pay attention to negative experiences of breastfeeding. There is no need to consider that these adverse effects may outweigh any benefits. They don’t mention that the recent review of the NICE guidelines into postnatal care looked at evidence for how to help people with breastfeeding and found pretty much no good evidence to inform how common problems can be prevented or resolved. In fact, at no point do these researchers consider that research efforts might focus on helping women with these clinical problems.

They don’t mention that exclusive breastfeeding, which is now pretty much universally promoted, is a risk factor for infants requiring readmission for treatment of neonatal jaundice in the first month of life or weight loss in excess of 10%. A recent review found that for every 13 exclusively breastfeed babies, one will lose in excess of 10% of their birthweight. For every 71, one will require hospitalisation for hyperbilirubinemia, dehydration, hypernatremia or weight loss.

Now, about those emotional people on social media… Who are they referring to exactly? Is it emergency medicine physician Christie del Castillo-Hegyi, whose son suffered from life changing kernicterus as a result of being underfed as an infant? Or is it Landon Johnson’s mother, Jillian Johnson? Landon died as a result of insufficient milk intake when his parents had been encouraged to exclusively breastfeed. Emotional? Yeah… and resonant with the tens of thousands of families from around the world who have contacted The Fed is Best Foundation (the organisation that Dr del Castillo-Hegyi founded) with their stories and asking for help to safely feed their babies. We salute them for all they have done in helping us to understand what our families went through.

Do they mean people like us: parents highlighting the harms we experienced as a result of current infant feeding policy and practice? Denialists? Parents who are reading the literature and reeling from the fact that equivocal evidence was used to coerce and manipulate us into breastfeeding?

Now, this statement we kind of agree on:

Researchers should provide ‘clear evidence summaries of their findings’ and ‘discredit unsubstantiated claims’. We suggest they start with the claims made by breastfeeding advocates! We also suggest that breastfeeding rates should not be the yardstick by which we measure the success of infant feeding policies (yes, we know – heretical and proud). You tell us: what is more important, breastfeeding or

the physical and mental health of babies and parents

We remind you that for all the handwringing, there isn’t a single study that has demonstrated that breastfeeding promotion efforts in the UK, or in a comparable high income context, have led to improved health outcomes. However, we are concerned about the impact of these efforts on the mental health and emotional wellbeing of mothers. This issue was highlighted in a recent review of the so-called ‘Baby Friendly’ Initiative in the UK. We are also concerned about the rising rates of emergency admissions for neonatal jaundice and the role that policies promoting exclusive breastfeeding might play in this trend.

So, really… denialists? Could you be any more dismissive of the families you purport to help and those who have suffered harm as a result of the policies and practices you promote? Do we sound like conspiracy theorists and denialists? Or do we sound like informed parents, who are demanding that policy be informed by a balanced view of the scientific literature and insisting that healthcare practice respects autonomy and promotes patient safety?

This blog was adapted from a thread on Twitter.

We are the Magic